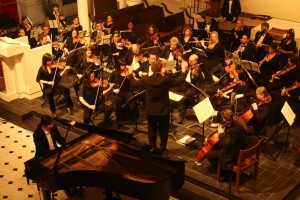 NEW YORK – On March 27, in its New York Concerti Sinfonietta “Shining Star Series” at the Church of St. Joseph in Greenwich Village, “Julie Jordan Presents” introduced additional winners of its 2011 International Piano Concerto Competition. Dr. Julie Jordan, who is Artistic Director of the Competition, is an accomplished pianist in her own right and has been a member of the faculty of The Juilliard School Evening Division for the past 26 years.

As customary, the soloists were accompanied by Julie Jordan’s New York Concerti Sinfonietta, a top-rank 40-member professional orchestra, sounding particularly opulent and resonant in the flattering acoustics of the historic church. Making his debut as guest conductor with the orchestra was Jeffrey Grogan, who is in his sixth season as Education Conductor for the New Jersey Symphony. Mr. Grogan proved to be an alert, sympathetic, and impassioned collaborator in varied and sometimes unfamiliar repertory.

The principal novelty of the evening was the closing work, the rarely heard Scriabin Piano Concerto in F-sharp minor, Op. 20, written in 1897 when the composer was 24. It has never attained the popularity it deserves, possibly due to the reluctance of pianists to confront the daunting technical demands it places on the soloist. Although Scriabin, a titan of keyboard music, wrote ten piano sonatas, this was the only concerto he composed.

Scriabin’s three-movement, nearly 30-minute concerto was played by Chinese-Canadian pianist Owen Zhou, First-Prize winner of the 2011 International Piano Concerto Competition, College Division. Now a Colorado resident, Mr. Zhou is currently studying for his doctorate at the University of Colorado at Boulder. He holds a bachelor’s degree from the Eastman School and a master’s from Northwestern University,

Mr. Zhou made a persuasive case for this neglected – but far from negligible – concerto, giving it a distinctive and distinguished interpretation. The first movement was commanding in its authority; the second movement’s theme and variations expressive and deftly characterized. The finale, in particular, requires ample bravura if it is not to sound like tepid, warmed-over Chopin. Mr. Zhou had the special talent needed to give this romantic concerto a heroic, full-blooded performance, emphasizing its harmonic originality, prophetic chromaticism, and Lisztian magnificence. 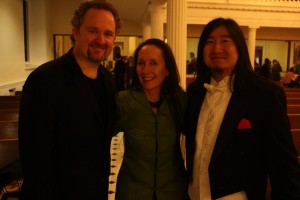 Mr. Zhou possessed the velocity, power, and panache to make the concerto come alive in a manner seldom experienced. Maestro Grogan was an ideal partner. Under his direction, orchestra and soloist rose to a glorious culmination in the last movement, glowing with passionate fervor evocative of Scriabin’s orchestral masterwork, “Poem of Ecstasy.” The performance was deservedly greeted by cheers from the capacity audience.